Generally three basic values can be measured: humidity, carbone dioxide, and temperature. Temperature is just one of the most important parameters of the bee colony describing the individual state of the particular colony. It is possible to check the state of bee colonies in the swarm of bees, in the cell with capped larvae, under the hive ceiling and the outer temperature. According to the temperature one can detect not only the strenth of bee colonies but also predict the future swarming and this way prevent the carrying away the honey already collected and the take-off of the bee swarm. One can also very quickly check a technical state of the bee hive, for example when a hive is damaged by vandals or by natural hits or disasters. At the same time the outer temperature can be measured and according to it one can deduce the outer activity of bees and can generally assess the quality of the site in relation to the particular period of the year.

And it is just temperature wich we measure with our device. The temperature is measured with precision of one hundreth of Celsius with the help of an exact digital sensor. The measuring devise consists of moduls with temperature sensors placed in the hive and one modul connected to the computer receiving the data. Because the particular parts of the system communicate wireless there is no need of any cabelling. The range of the device in an open space is up to 600 metres. The battery power supply can supply the device for many months. The state of batteries is monitored by the device itself and reports the imminent discharge. Thanks to wireless system the sensors can be placed very simply and quickly into the bee colony without complicated adaptions of the hive. Throughout the year one can monitor the temperature without disturbing the bee colony as well as handle and trasport the hives. 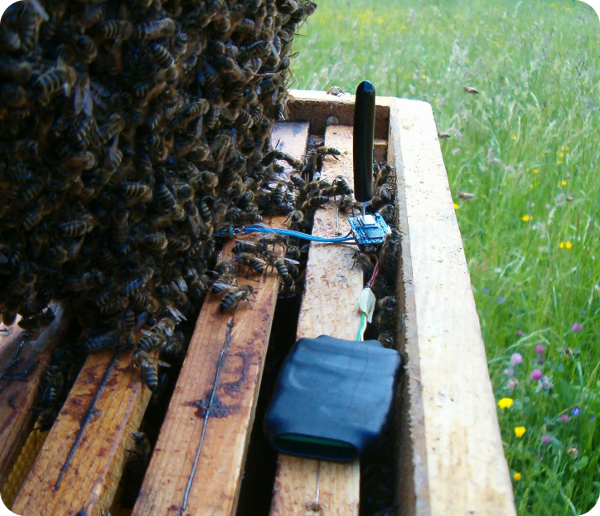 The service application runs on a ordinary PC where the receiver is connected in USB port. The program runs on computers with operation systém Windows or Linux. One also needs Java and software for USB device nevertheless both of them are usually part of the system. This application continuously collects the measured data, records them into the database and shows the actual values. And just thanks to the database it is possible to export the data and process the measured values with the help of OpenOffice or MS Excel.

In the picture there is a visualization program which shows the display of the actual temperature measured in particular bee-hives. 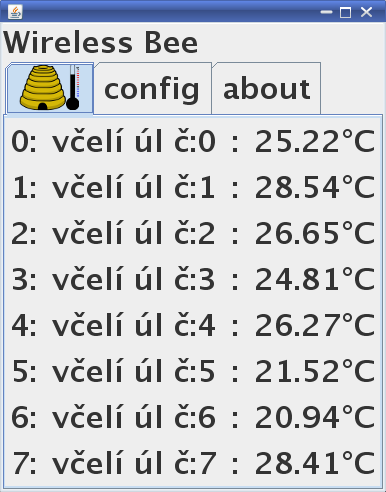 As concerns future possibilities we consider the self-service hardware which would service the receiver instead of PC and would be connected into the local network so that it would not be necessary to start the computer and information could be read on any device having web browser and in case of the connection to internet even directly from work. i např. z práce.

Thanks to this project it is not necessary to use ordinary thermometers in a complicated way or impractical homemade temperature sensors. It is not necessary to go to the hives and read particular temperature values and then write them down manually on the paper and then copy them in PC and do all this reagularly and even several times a day to get results of good quality. All this can be done in such a simple way that it is accesible for each beekeeper. Just for making things simple there are today´s labour-saving devices which save beekeeper´s trouble because everything is measured and recorded by WirelesBee.